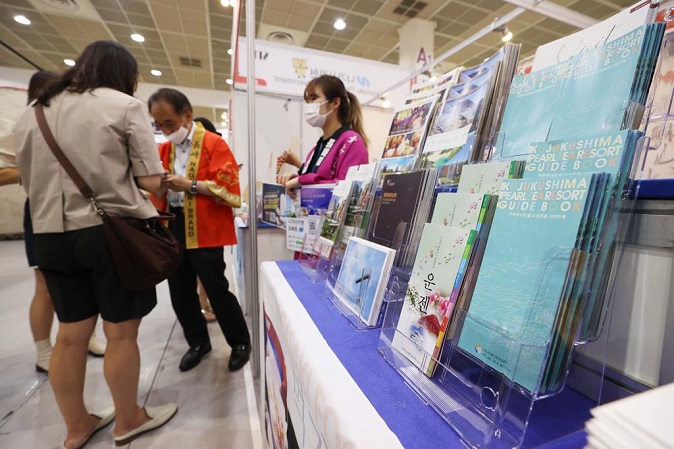 Japanese tourism officials explain the attractiveness of travel to tourist spots in Japan during an international tourism expo at the COEX convention center in Seoul on June 23, 2022. (Yonhap)

SEOUL, July 28 (Korea Bizwire) — Travel packages once popular in Japan following the lifting of entry restrictions to the country are being canceled with the summer holiday season fast approaching.

Between July 20 and August 14, about 40 percent of all travel bookings in Hokkaido were canceled, according to travel agency Mode Tour.

The Hokkaido travel package saw a 250% increase in bookings in the second week of June.

The cancellations are mostly attributed to ongoing travel restrictions in Japan, except for group tours and a lengthy visa process that takes two to three weeks to issue travel documents.

Additionally, travelers are only allowed to visit pre-planned destinations in the country and a designated guide must always accompany them while shopping.

Unlike countries in Europe or Southeast Asia, travelers to Japan should be tested for COVID-19 before and after visiting Japan.

Japan has been South Korea’s most popular summer travel destination due to its proximity and relatively cheaper cost of travel.

Coupled with the sharp depreciation of the Japanese yen this year, the won/yen exchange rate fell to 950 won per 100 yen, another point of attraction for travellers.

“Travel to Japan is only expected to resume with the return of the visa waiver program and free individual travel,” Mode Tour said.